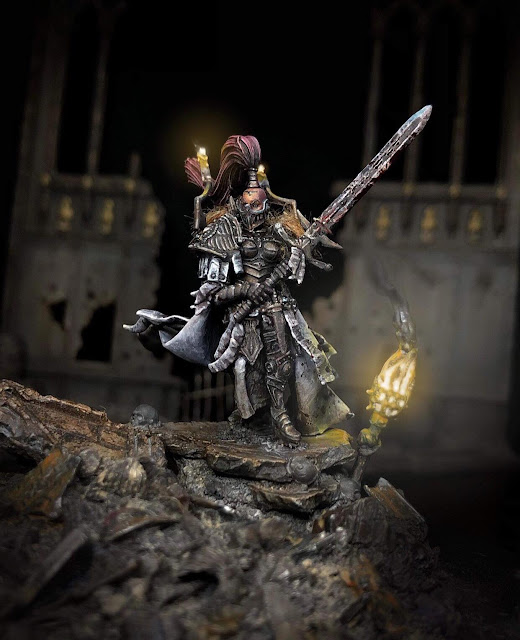 'Am I a myth too? Surely no one will write mine if I am. I have no one to tell who will listen.' -Dan Abnett, Saturnine
We will, Jenetia!
If you've been following any of my social medias, you might have noticed that the last few months have been a non-stop production line of Sisters of Silence. These started as a Kill Team but have predictably blossomed into an army fit for the new edition of the Horus Heresy. In many ways, the Sisters have been a perfect army for me; I love their models, their lore and their playstyle. So, after converting/ building 5 units of Sisters and 2 Kharon Acquisitors, I thought it was finally time to paint the leader of the force, Jenetia Krole.
Jenetia is, perhaps suprisingly, not all that discussed in the background material, despite having been a character in the Heresy since the card game and being one of the Emperor's right hands. She is a secretive character, however, and as a null, is easy to miss. Check out this excerpt from Saturnine:
'They barely see me. They try. Even with their immortal senses, they struggle. I am a smudge. A smear. A piece of stained light in which the image of a woman occasionally appears, if you strain to look. They don't.'
It seems that until the release of Dan Abnett's Saturnine, no one really did strain to look.
I did as much research as possible before building the miniature. It's not often, if at all, I paint named characters without converting them to be a different character, so I wanted to get my miniature of Jenetia to capture the general "vibe" of the character as best as possible. For this, I read Horus Heresy: Inferno, Prospero Burns, Master of Mankind and Saturnine, though it was that last one which really inspired the miniature; this was one of my favourite Black Library books I've read in a long time, and I loved how Jenetia Krole was written especially. The first person PoV gives her a vulnerability not found in many other Warhammer characters, as most are usually drowned out by bolter fire. She's relatable, aided by her independence from the warring factions as she scours the battlefields alone (for the most part), yet also a total badass, cutting down swathes of daemons and World Eaters.
As with most of my projects, I knew I wanted to convert her to fit my vision of the character better. I scoured through my treasured copy of Visions of Heresy, and settled on modelling my Jenetia after the classic Sam Wood art of Jenetia Krole standing beside the Emperor (this is also the colour scheme which I copied for my army). I thought this pose also fit the idea of her as an inspiring presence, as she is in Saturnine ('My whole life, I have stood apart, and wherever I have gone, I have spread only fear and discomfort. But here, briefly and unexpectedly, I have affected people in another way.').
Here is my unpainted version of the miniature. As you can see, I did a few conversions. Chiefest of these, I had the model hold her sword in two hands using some parts from the regular Sisters of Silence. I also replaced her cloak witht he far grander one from the Assassin kit. I framed her head with a piece from the Mortis Engine, which was then complemented with candles from Grimaldus. I sculpted on a number of smaller details and raised her base details a little by sticking a smaller base underneath.
To paint Jenetia, I broke her down into 3 sub-assemblies: her head, the main model, and the base. I started by painting the head, which you can see below: 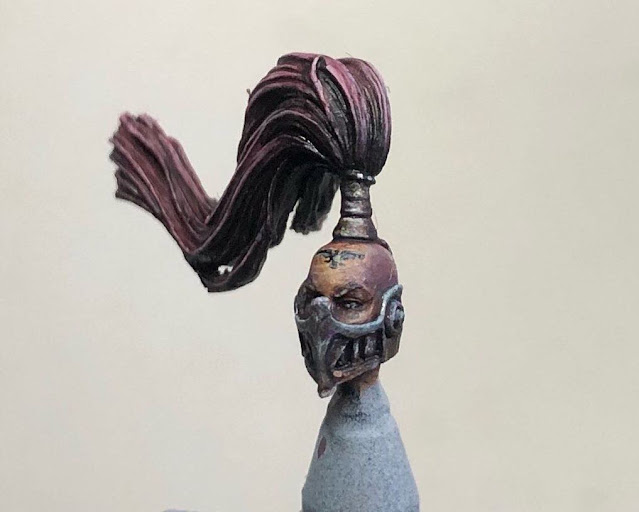 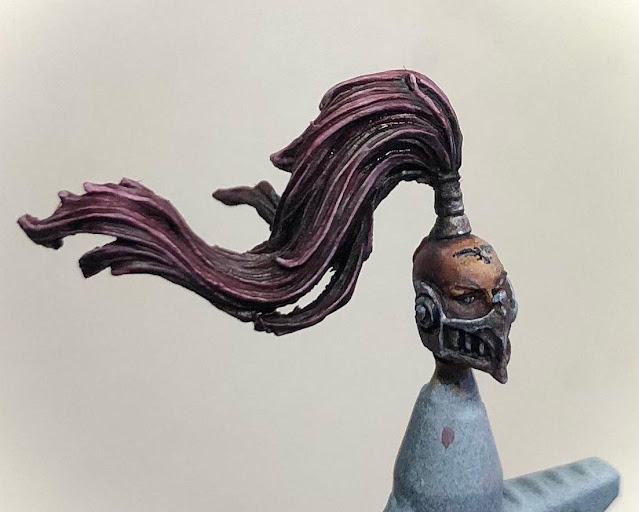 Once happy with the head, I painted the base and then the main body, which I spent most of my time on. I painted her over the course of about ten days. 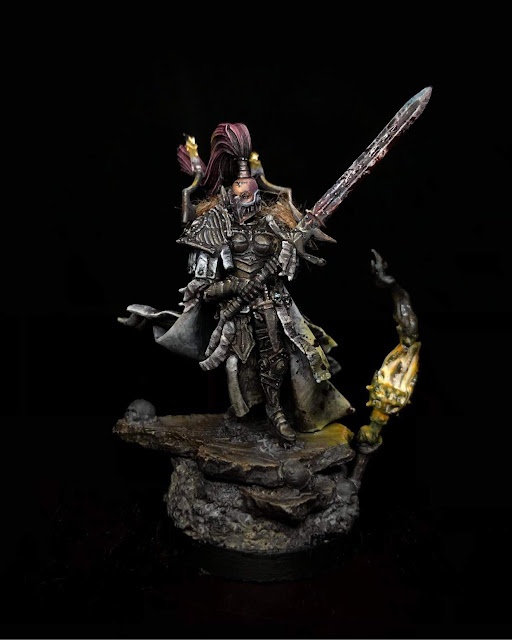 And here she is! Some of the most important choices in bringing the model together came at the end, once the paintjob was complete. These were: 1) the OSL. To emulate her soulless, light-bending effect, I made the OSL stronger on the stone on her base than it was on Krole. 2) The fur. I used some fur from a stuffed animal in the place of painting the fur on the model, giving it a more intricate and realistic look. This is possibly something I'll go back and add to my other Sisters in time. 3) The blood splatter. As this is perhaps Krole at the siege of Terra, I needed her flank to be covered in gore and ichor, showing her violent capabilities. 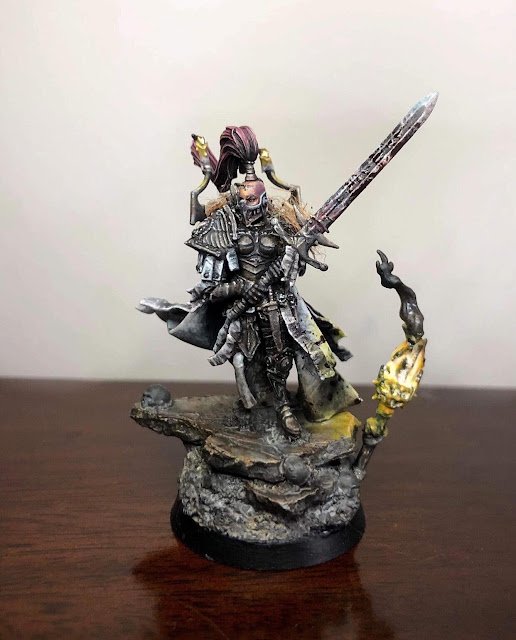 'The fact of my absence is a place they cannot explain, so they have filled it with stories and ideas, and those stories and ideas have given them strength and hope and courage.' --Dan Abnett, Saturnine.
Thanks for reading. 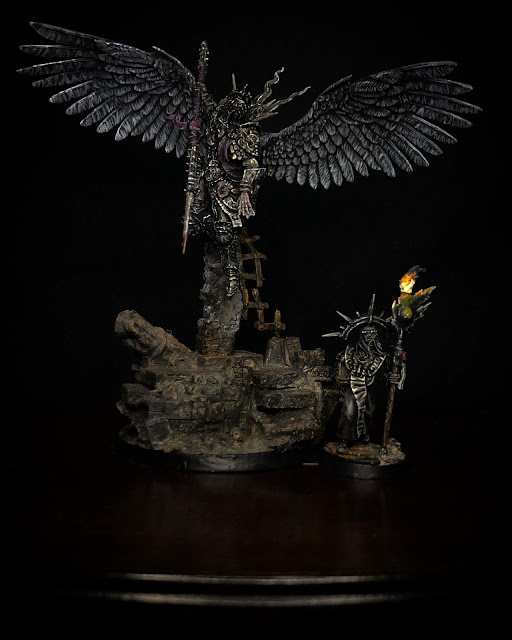