Hi everyone, so this is a sort of essay I’ve been wanting to put together for a while now. I must start by stating plainly that I’m likely not the most qualified person to write a thesis statement about Blanchitsu or art in general. I’ve never had the pleasure of meeting John Blanche. Nor do I have hobby experience that dates back further than 2011, but I’d like to look at the influence Blanchitsu has had on the Warhammer community, especially in recent years.
When I first joined Instagram and started sharing my models, I naively would’ve described them as Blanchitsu, and though I’ve flirted with the hashtag now and then, (and I’d definitely say they’re derivative of the art style, or they’re at least kind of Post-Blanchitsu anyway), I hesitate to call them that without being one of Blanche’s immediate followers, though your mileage may vary.

But at the heart of it, what is Blanchitsu?

So, the word Blanchitsu comes from John Blanche’s name, put simply. It’s also used quite interchangeably with ‘grimdark’. The miniatures themselves are usually centred around human conflict; you’ll find that many of the models under the Blanchitsu hashtag on Instagram are simple humans, so there’s certainly a sort of relatability about the miniatures. If not humans, the models are very human-centric, often exploring Stormcast Eternals or Space Marines and their detachment from humanity. Even in the case of alien factions, their relationship with humanity is explored; you see AoS28 creatures with terrifying baby faces (my Sylvaneth included) and vile monsters with a glint of something recognisable painted into their eyes.
The models are usually highly converted; there have been some staples of these conversions over the years, from the Nurgle Lord to the Cairn Wraith, as until recently, models with large skin areas and flowing robes were quite uncommon, but GW seems to have noticed the love for these models by expanding them into factions of their own in the years since. The models are also usually painted in de-saturated tones. Lots of blacks and whites (ironically), unhealthy skin, dirty robes and muddied bases, but for every rule, there seems to be a thousand exceptions. Put simply—it’s more of a philosophy than a set of commandments.
Oh, and it’s all usually inspired by John Blanche’s work to various degrees (and often those of Ian Miller, another highly talented artist).

So why bother talking about it?

Well, since I joined Instagram, just two years ago, the Blanchitsu community has exploded in popularity. I remember looking at the hashtag during that time and seeing around 700 posts. Now, there are around 24,000, which is a bit mad. Among those, various names have popped up time and time again, whether on Instagram, Facebook, various forums or other—there are too many pillars of the community to count—@Ironsleet, @a_polanscak, @btwnbolterandme, @helgewilhelm, @warbosskurgen, @shibboleth02, @dark_tech_, @exprofundis and @28_mag to name just a few—(if your name isn’t here—don’t fear; this is just a sample). There have even been organised events under the umbrella of Blanchitsu, from Ironsleet’s The Pilgrym, to TorMegiddo, and it’s certainly catching the eye of the greater Warhammer community—hell, it was the old White Dwarf Blanchitsu articles that inspired me to try a similar style for myself.
Simply put, if you’re into Warhammer, you’ve probably come across this style. Many people think it’s weird, a waste of plastic or blasphemy to the original plastic kits. And that’s okay! But it’s certainly a style of our bizarre little hobby that’s worth knowing about and discussing. At Warhammer Fest 2019, Nick Bayton joked about me being a weirdo or something like that when I showed him the baby faces sculpted onto my bases (it was all in good fun), and I’ve received several similar comments from people online about my work and in person too (also usually in good fun), so it appears to be quite Marmite, which I find interesting. Isn’t it just an extension of the hobby’s twisted, grimdark world’s we’ve come to know and love? Or has our/ this weird corner of it become a hobby unto itself?

That’s great, where do I start?

I’m not overly-qualified on this subject. I hesitate greatly to call my own work Blanchitsu. I’d like to think I’m slowly developing my own style, while being derivative and paying homage to art I enjoy. That being said, a couple tips I would like to give are:

·        - Don’t convert models for the sake of it. I’ve fallen into this trap, and it’s a bit of a waste of bits. Only convert them if you want to convert them, not just to fit in with some arbitrary group. Look at @Migsula ‘s recent work—very little is highly converted. All fits the theme.

·         -Desaturated colours—lots of browns and blacks, pale skin and whites. This gives the ‘grimdark’ atmosphere while still allowing you to develop your own style, rather than repurposing your entire hobby.

·         -Typhus Corrosion is your friend. Thin it heavily. Wipe it away with cotton buds.

·       -  http://www.exprofundis.com/paint-blanchitsu-style/ --this article is some fantastic further reading.

So, how does Blanchitsu differentiate to normal Warhammer?

I alluded to the idea earlier that Blanchitsu might be a separate hobby to Warhammer. Ultimately, it isn’t, but I’ve found that those who convert, paint and even write for their models in this style do approach the hobby in a very different way to those who don’t. Don’t get me wrong, that's in no way to sound elitist or to project elitism onto a certain  group; I’m no amazing painter, and those who paint in the more ‘Eavy Metal style often are. It’s a great style and it often looks fantastic. It’s just not how in envision the Warhammer Worlds personally. In a way, Blanchitsu is a sort of postmodern approach to the hobby—it explores the darker aspects of our tiny plastic people, their interior conflicts and all their shades of grey. Sometimes, I just want to paint a blue Space Marine and have him shoot a bunch of Orks through the head, I really do! I love all aspects of Warhammer. But the Blanchitsu-type sides are certainly a different beast.

Despite that, I think the lines are blurring. Blackstone Fortress, Rogue Trader, Warcry and all manner of skirmish games have been released from GW over the last couple of years, all of which are basically grimdark out of the box. They’re a great place to start if you’re interested in straddling the gap. The Blanchitsu crowd is undeniably changing Warhammer and the direction of the hobby, especially so in Age of Sigmar—look at the contrast between the release box and Soul Wars, and for me, it’s a change for the better. And for the record, I don’t want every model to become Blanchitsu from the box, but it is nice that the crowd is being catered to, that these sides of the hobby are valid and are being recognised. I don’t think the practice is particularly newcomer-friendly yet, but I believe all of that will change in the coming years.
Now we just need GW to bring back the White Dwarf articles. 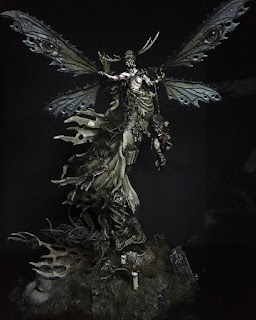