(Or why Age of Sigmar Might Be My Favourite Fantasy Setting Part 2)
With the fifth anniversary of AoS looming, as well as some reveals about The Old World setting being released by GW, I wanted to talk about something I forgot to talk about in my first AoS appreciation post--something very vital to how I interact with the setting and the game.

So why do we love to explore worlds that have suffered a catastrophe in the comfort of our homes?  Wired's article, Why Do We Love the Idea of the Apocalypse So Much? (https://www.wired.com/2018/12/geeks-guide-apocalypse-poet/) states, 'one reason we’re drawn to apocalyptic stories is because they capture the way that personal tragedy can feel like the end of the world. “For somebody, their world is ending as we speak, right now,” Bailey says. “Somewhere some tragedy is enveloping someone, and their world is going to be completely remade as a consequence, and it can happen at any time.”' Put simply, it's a way of overcoming personal suffering through projecting it onto everyone so that everyone must suffer together in a sort of shared-empathy, cathartic way. The story of a post-apocalyptic world promises redemption for this catastrophe--a rebirth.

Usually, these kinds of stories are relegated to adventures taking place after the death of our own world or similar; this allows audiences and readers to fill in the blanks and get a good contrast between the world that was and the world that now is. This is a lot more difficult in a fantasy setting, as the implied world before the apocalypse was likely just as crazy as the one that comes after. Also, a lot of exposition and world-building is needed in a small space to flesh out the doomed world that came before, only to end it.

The Warhammer universe seems like the only setting that could feasibly remedy both of these qualms; the Old World was utterly fantastical, but it was grounded through its decades of lore and story. This established lore and story that acted as a living setting in its own right only works better with the introduction of the Age of Sigmar; the new setting builds upon the old and gives the surviving characters a personal history that influences the new world. There's something really interesting about the existential crisis Archeon must be having after successfully ending the world, only to have to deal with a new one popping up.

The restructuring of the different races in the setting is also really cool. The elves/aelves are scattered and decaying--their majesty has turned cruel. Only in a post-apocalyptic setting could the Idoneth Deepkin exist. Dwarfs/ Duardin have adapted and changed to the new landscape while still bitterly remembering their history, all while humans pray to Sigmar, their last hope for normality. One of the really cool changes, I think, are those of the Lizardmen/ Seraphon; they escaped the apocalypse only in memory, so now the same models are usable again but in a completely different context and form that still can allow for snippets of the original lore and characters to be present. Another cool change is that of Slaanesh--after essentially winning in the last setting, this god is now tired and glutted, giving room for the fascinating Godseekers and Pretenders host. It's the same lore and characters, just shaken up into a (in my opinion) more interesting and less classicly-fantasy dynamic. Unlike history simply written down in army books before to give different factions history and motivation, this time, the history has been played in, shaped by the player base. You can see it evolve and reflect.

I can imagine a tavern in Chamon being crowded by Duardin and humans as they grumble and boast about their family legacies and the myths they like--except instead of those myths being unknowable snippets of lore, they're bits of lore fought by the player in WHFB and the Old World. Stories that don't exist simply to be lore, but stories that existed for the sake of existing at one point, not unlike actual history. The stories and conflicts seem much more relatable and human in that way.

I think another cool aspect of this post-apocalyptic setting is one that has recently been explored in Warcry. Put simply, Chaos won. Chaos, despite Sigmar's attempts, is still the dominant ideology in the setting. Stormcast and ordered humans are extremists, colonisers. It really adds a more interesting dichotomy into the setting, rather than just the status quo of good humans that occasionally get invaded by baddies from the north. Chaos is all around civilisation in AoS; it's an oppressive force that is every bit as common and malignant as the flu.


AoS has a rich history because it has a real history. 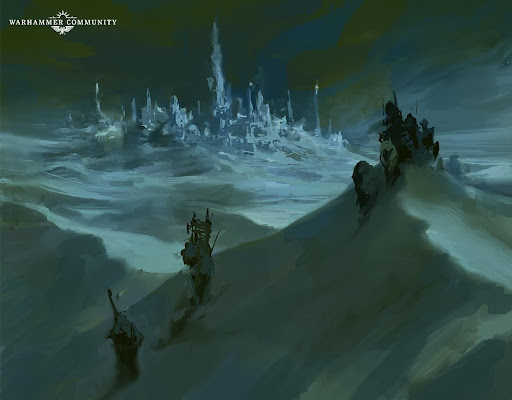 Why Age of Sigmar Might be my Favourite Fantasy Setting